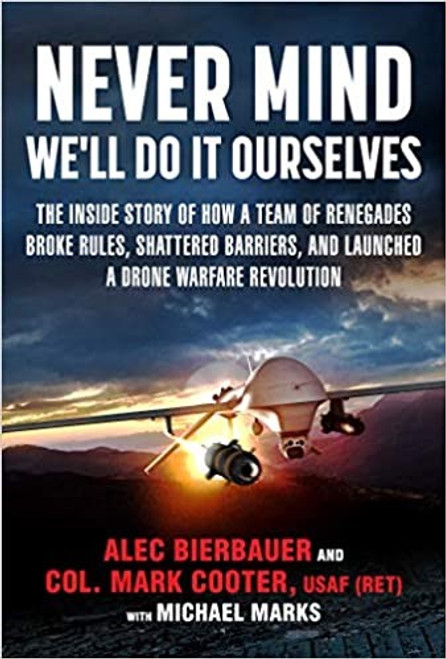 The Inside Story of How a CIA Officer and an Air Force Officer Joined Forces to Develop America’s Most Powerful Tool in the War on Terror.

Never Mind, We’ll Do It Ourselves is the story behind the origins of the Predator drone program and the dawn of unmanned warfare. A firsthand account told by an Air Force team leader and a CIA team leader, Never Mind, We’ll Do It Ourselves takes readers into the back offices and secret government hangars where the robotic revolution went from a mad scientist idea to a pivotal part of global airpower.
Featuring a foreword by Charlie Allen, an introduction by Lieutenant General John Campbell, USAF (Ret.), and an afterword by Lieutenant Colonel Gabe Brown, the story reveals the often conflicting perspectives between the defense and intelligence communities and puts the reader inside places like the CIA’s counterterrorism center on the morning of 9/11. Through the eyes of the men and women who lived it, you will experience the hunt for Usama bin Laden and the evolution of a program from passive surveillance to the complex hunter-killers that hang above the battlespace like ghosts.

Poised at the junction between The Right Stuff and The Bourne Identity, Never Mind, We’ll Do It Ourselves documents the way a group of cowboys, rogues, and bandits broke rules and defied convention to change the shape of modern warfare.

“An extraordinary, riveting, page-turning account—finally cleared for publication by the CIA—of the once highly classified effort by the CIA and special military units to develop a truly game-changing, transformational capability: armed drones."—General David Petraeus, US Army (Ret.), former Commander of the Surge in Iraq, US Central Command, and US and Coalition Forces in Afghanistan, and former Director of the CIA​