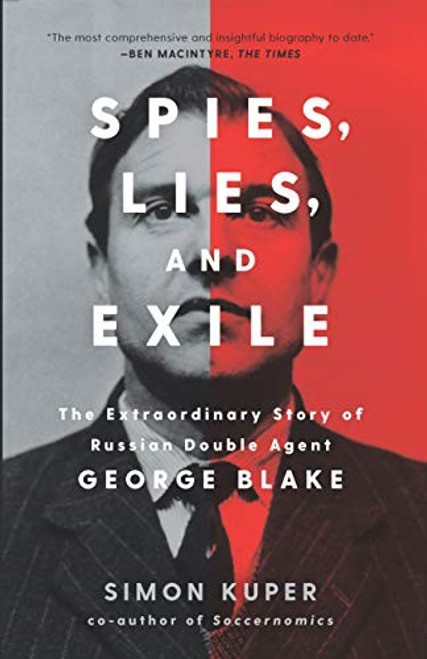 “Kuper provides a different and valuable perspective, humane and informative. If the definition of a psychopath is someone who refuses to accept the consequences of his actions, does George fit the definition? There he sits, admitting it was all for nothing, but has no regrets. Or does he?” —John le Carré

After fighting in the Dutch resistance during World War II, Blake joined the British spy agency MI6 and was stationed in Seoul. Taken prisoner after the North Korean army overran his post in 1950, Blake later returned to England to a hero’s welcome, carrying a dark secret: while in a communist prison camp in North Korea, he had secretly switched sides to the KGB after reading Karl Marx’s Das Kapital.

As a Soviet double agent, Blake betrayed uncounted western spying operations—including the storied Berlin Tunnel, the most expensive covert project ever undertaken by the CIA and MI6. Blake exposed hundreds of western agents, forty of whom were likely executed. After his unmasking and arrest, he received, for that time, the longest sentence in modern British history—only to make a dramatic escape to the Soviet Union in 1966, five years into his forty-two-year sentence. He left his wife, three children, and a stunned country behind.

Much of Blake’s career existed inside the hall of mirrors that was the Cold War, especially following his sensational escape from Wormwood Scrubs prison. Veteran journalist Simon Kuper tracked Blake to his dacha outside Moscow, where the aging spy agreed to be interviewed for this unprecedented account of Cold War espionage. Following the master spy’s death in Moscow at age ninety-eight on December 26, 2020, Kuper is finally able to set the record straight.