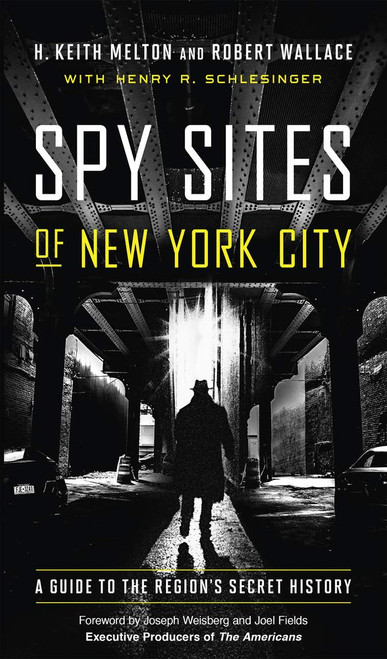 Through every era of American history, New York City has been a battleground for international espionage, where secrets are created, stolen, and passed through clandestine meetings and covert communications. Some spies do their work and escape, while others are compromised, imprisoned, and―a few―executed. Spy Sites of New York City takes you inside this shadowy world and reveals the places where it all happened.

In 233 main entries as well as listings for scores more spy sites, H. Keith Melton and Robert Wallace weave incredible true stories of derring-do and double-crosses that put even the best spy fiction to shame. The cases and sites follow espionage history from the Revolutionary War and Civil War, to the rise of communism and fascism in the twentieth century, to Russian sleeper agents in the twenty-first century. The spy sites are not only in Manhattan, Brooklyn, Queens, and the Bronx but also on Long Island and in New Jersey. Maps and 380 photographs allow readers to follow in the footsteps of spies and spy-hunters to explore the city, tradecraft, and operations that influenced wars hot and cold. Informing and entertaining, Spy Sites of New York City is a must-have guidebook to the espionage history of the Big Apple.

The Man without A Face: The Autobiography of Communism’s Greatest Spymaster

John Mulholland’s Story of Magic: The Development of the Art of Illusion by the CIA’s Master Magician

The Master Theorem: A Book of Puzzles, Intrigue, And Wit