You Are A Liar - Fact Or Fiction Guessing Party Game 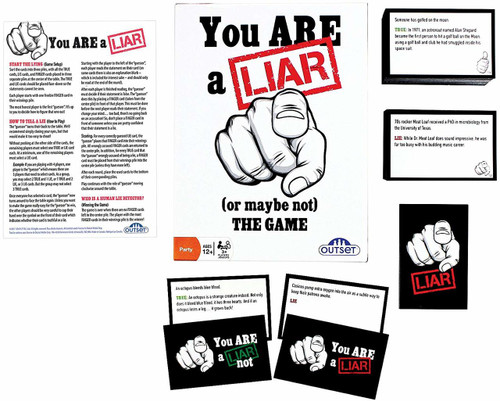 You Are A Liar - Fact Or Fiction Guessing Party Game

You Are A Liar is sure to raise a few eyebrows! Players take turns being the reader and the guesser. The guesser will turn their back to the table while the other players grab a card, with at least one lie card and one truth card being played each round. Once everyone has selected a card, the "guesser" turns around and listens while the players take turns reading their statements. The "guesser" must decide if the player's statement is the truth, or a lie. If it is a lie, a Finger Card is placed in front of that player. This must be done before the next player reads their statement. If you change your mind ... too bad, there is no going back on accusation! So don't play a finger card in front of someone unless you are pretty confident that their statement is a lie! For every correctly guessed Lie card, the "guesser" places that Finger card into their winnings lies. For every wrongly accused statement, a finger card must be placed from their winnings pile into the center pile. The player with the most fingers at the end wins! Find out who is the biggest liar in the group. Great game for parties and hang outs. Guess the most lies and win the game! Key product Features You Are A Liar is a Fun Filled Game of Fact Or Fiction Statements. Players Take Turns Being The Reader And The Guesser. The Player Who Is the Guesser Determines Who Is Lying In Stories told By The Readers. Find Out Who The Biggest Liar In The Group Is. Great Party Game, Provides Many Laughs.

Recommended for Ages 12 and above.